Interview with Khun Sombat Boongamanong, the man behind the Red sundays 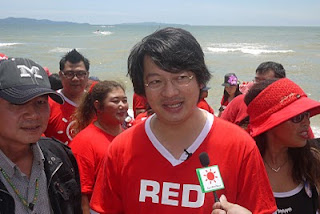 Sombat Boongamanong has become one of the most active, well…, activist supporting the Red shirts in the aftermath of the 19th of may military crackdown on the demonstrators in Rajprasong. He has launched the creative and well attended “Red Sundays”, during which, every week end, Red supporters are gathering in one city and organizing various pacifist activities.
Last week end in Pattaya, the program sounded very attractive : female militants clad in Red bikinis were supposed to invade Jomtien beach by the hundreds and swim in the brown waters of Pattaya’s seashore. The reality was a bit more conform to the Thai cultural reserve and reap-royness. Charming Red ladies did bathe in the sea but in Tee Shirts, pants and skirts. Which was nice enough to watch at.
On the more political side, we had the opportunity to interview the organizer of the event, Khun Sombat Boongamanong about the meaning of Wan Athit See Daeng, and the information war between the militants and the State powers.

Khun Sombat : I am a citizen. Many of the Red shirts leaders have been arrested. And so, as citizens, our problem now is to know how we can get organized. I think that we have to become ourselves leaders, we have to organize our own activities and invite our citizens friends to join and do the same.

Question : The war within Thai society is not a war taking place in the streets, but it is a war on the communication battlefield, a war of information, propaganda and communication technology. In this war, the State powers seem to have difficulties to fight their opponents. They don’t seem to understand how to use efficiently the communication technology tools like twitter, facebook and so on. It looks like these State powers are loosing the battle. They don’t seem either to know how to win the support of journalists. What is your view ?

Khun Sombat : I agree. I don’t think it is a civil war. It is a war of understanding, but it is also a class war, but not to a point of violence as to be a civil war. We have to discuss with each other. In Thailand, there is a continuity in the political development of the country. I think we are now reaching the final phase, because almost all the social classes have fought or are fighting for democracy. There is only now the lower classes left to join the struggle for democracy.
And we, who belong to the middle classes, are supporting the struggle of the lower classes. But we want to use the power of explanation, the power of knowledge to transform our country. We do not want to wage an armed struggle or use violence. In any case, I think this country has to change. But we want this change to happen through pacific actions. And if we want to wage a pacific struggle, we have to wage it on the information field. If it does not work, then maybe we will have to use force. Nevertheless, I think that now we still have the choice between these two paths. We want to base our struggle on communication and knowledge.