Don’t miss it on your favorite channel : The Floods, the watery soap opera 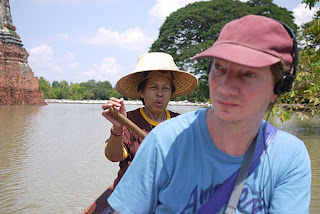 Forget Dok Som Si Thong (Golden Orange Blossom) and Roi Mai (silk thread), the soap opera not to be missed these days is Naam Tuom (The Floods), which is played on all channels and will bring you all the usual ingredients – the heroes, the drama, the tears, the monsters…- plus the thrill of watching a non-stop reality show. The hero or Phra Aek is the veteran actor Sorayuth, a kind of massive demi-god whose voice resonates like thunder as he crisscrosses the country on boat with a cryptic encircled diagram on his breast : 3. Surrounded by supporting casting, feet in the water, he gives his oracles and predictions as provincial figurants are floating in the background. He is a real Phra Aek, fearless and generous, distributing thousands of rescue bags marked with his diagram, but there are also failed heroes in the drama, like Plodprasob Suraswadee, the billionaire minister of Science, who unsuccessfully tried to take the centre stage by triggering an ill-advised full scale floods alert for the residents of Northern Bangkok on 13th October.
Every keen lakorn watcher knows that a good soap must have a lot of tears, salty water drops rolling down the cheeks for minutes and minutes which express a state of intense internal dismay. The Floods is no exception, and it was a poignant moment to see Kittirat na Ranong, the Deputy Prime Minister, bursting into tears in the arms of a puzzled Japanese investor. Kittirat had stoically contained his emotions for a number of weeks in face of thousands of provincial villagers whose houses half disappeared in flood waters. But the water invading the Hi Tech industrial estate in Ayuthaya was to much to bear. The wall this sensible man had built within himself in order to perform his duty to the best of his abilities burst out with the dyke.
Then who are the bad guys in the story ? Those who sport a moustache of course ! Actually, Chuwit Kamolvisit, again, pointed at the nasty characters lurking in the (flooded) sideways : pirates who raid empty houses and money thirsty boat owners who racket helpless flood victims. Another tempting question is to ask if Yingluck is the nang aek of the drama. It is maybe too early to say ; in any case, she had better be careful nobody else steal the show.