Benedict Anderson : "The lèse-majesté laws increase in harshness as the monarchy is afraid" 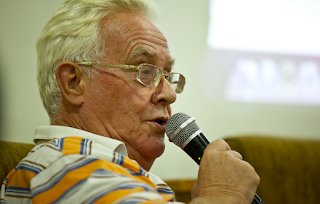 On 7th of June, Bangkok-based free-lance journalist Lisa Gardner organized a symposium to discuss the issue of the lèse-majesté law in Thailand. Journalists Pravit Rojanapreuk of The Nation and Andrew McGregor Marshall, who famously resigned his position at Reuters to publish the Wikileaks telegrams concerning the Thai monarchy, as well as the political scientist Benedict Anderson and the Thai writer Sulak Sivaraksa, participated to this panel called “Rhetoric and Dissent”. Following is the complete contribution of Benedict Anderson.

The “solid monarchies”, the ones we are likely to see around for 40, 50 years, all do have lèse-majesté laws, but these laws are more or less not in use at all. You can find jokes in British medias on the royal family, some not very friendly, but the institution is strong enough that people who wants to laugh laugh, and that is it. It is striking that the lèse-majesté laws increase in harshness as the monarchy is afraid. It is striking that in Europe, the country with the harshest lèse-majesté law is Spain, and the reason is that there is a huge scandal going on now which has reached the point where many journalists have said that it is time that the king abdicates. Abdication is the best way for the monarchy to stay if it has undesirable member. In the present crisis, the Spanish royal family does not dare to put people in jail for lèse-majesté, because the scandals that have opened are out of the control even of Spain.

The king is notorious for a long time to go on very long vacations, very expensive, at the expense of tax payers with no information of where the vacations were and who went with him. It is not a good idea, when Spain has a 50 % unemployment rate among young people and 23 % among adults. The last time, it comes out that he went to shoot elephants in Southern Africa and there are two striking things about it. First, he made his mark, before, by becoming the honorary president of World Wildlife Fund. Then it turned out that the vacations was paid by a Syrian billionaire, a right hand man for high Saudi Arabian ministers. The reason is that the King interfered to make sure that the Spanish corporations would be the ones to build a top speed railway between Saudi airports and Mecca and Medina. And of course, there has been for a long time plenty of gossip about his sexual behavior which has alienated him deeply from his wife. This is a monarchy which has a lot to hide and has been hiding it quite successfully for a long time. But it is now not more possible to hide it, because there are too many medias and sources all over the world who want to know.

This is an example that, when lèse-majesté laws are built, typically it is because the persons behind them have things that he or she or they “klua” (in Thai : “afraid of”). And the defense for that is increasing the lèse-majesté law. This is not just the case in Spain, you can find it in other places as well. You can take that as a sign not so much that Satan is doing better, but the opposite, that God is not doing so well.

Another thing is that monarchies these days in every country are the last. If the dynasty, the family dies out, there will be no new dynasty. All monarchies are aware of this. In most cases, that actually encourages them to do better than they used to. Because after this, it is going to be a Republic in some form or another.
One of the reasons, the source for a kind of warrior (i.e. ultra-royalist, ndlr), is something quite simple, it has nothing to do with monarchy, you can see it elsewhere. If you look at Bangkok Post statistics on the number of Thai men who were wearing yellow robes as monks or novices ten years ago, the number was still six millions Thais. But last year it dropped to 1.5 million. It is a colossal change. In ten years, the active Buddhist monks lost 70 % of what they had before. And it is not because of a plot, but because a very rapidly changing urbanization, of new forms of consumerism... It means that the space for holiness is quite seriously damaged. And in so far as the monarchy, traditionally, has some kind of religious aura around it, it is something we have to keep an eye on.

Six years ago. I was coming from the South on the eve of the elections. Going through Chumphon, Petchaburi, etc… I was looking for the billboards for Prachathipat (Democrat party). To my astonishment, I could not find any for three or four hours. 30 % was advertisements for monks, amulets and pagodas and 70 % was a kind of elections campaign, like somebody was running for re-election. This is a big contrast with the situation 30 years ago. It is the reverse side of all this anxiety : an enormous campaign, by bureaucrats, to drown the visible roads, shops, with endlessly repeated pictures of the royal family. You will find it hard to see anywhere in the world a place where so much energy is put into this kind of message, a sign of this kind of massive saturation of public space… We don’t need to have this in England, or in Sweden or Monaco, because it is too much. You have to know in this kind of situation how to react sensibly.

One anecdocte when I was a student at Cambridge university. After any movie, there was a shot on the screen of Queen Elizabeth on horseback. If you was crying after the movie or if you were inspired, you could not bear it. We would rush out of the cinema. Elderly people were furious and yelled at us. Ten years after, they move the short sequence about the queen before the beginning of the movie. Next to the advertisements for chocolates and pop corns. It was more easy, you just had to wait in the lobby. It was a more tactful way. Ten years after that, the palace gave up. It is all beneficial because we were really irritated by it. We need more flexibility and more understanding of what Thai society today is like and aspires to.
Publié par Arnaud Dubus à l'adresse 3:13 PM No comments: